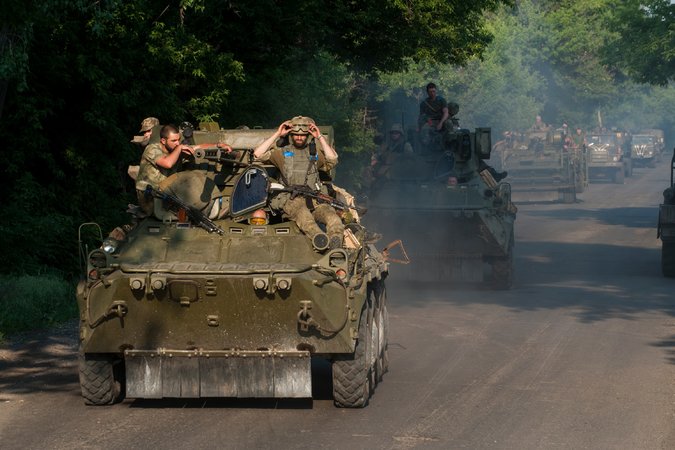 KIEV, Ukraine - Ukrainian forces repelled an attack by about 1,000 pro-Russian separatist fighters in the town of Maryinka, west of Donetsk, this week and captured at least 12 of them, including a Russian citizen, President Petro O. Poroshenko of Ukraine said on Friday.

Mr. Poroshenko, speaking at a news conference in Kiev, the capital, described the battle as a show of strength and resolve by his country’s military, which he has been working to rebuild since taking office a year ago amid the violent separatist uprising in the east.

The battle in Maryinka represented some of the fiercest fighting since a cease-fire agreement was signed in Minsk, Belarus, in February. Fighting has flared in recent days as frustration has mounted over the failure to carry out political components of the Minsk accord, and over efforts by the Ukrainian and Russian sides to blame the other for cease-fire violations.

The European Union has begun discussing the extension of economic sanctions against Russia, which are due to expire at the end of July, an issue that will also be on the agenda when the Group of 7 major economic powers meets this weekend in Germany.

Germany and France, which helped broker the Minsk accord, have been particularly displeased with the slow pace of its execution. Ukraine insists that all fighters and weapons must be withdrawn from the eastern regions of Donetsk and Luhansk, and that the border with Russia be brought back under Kievâs control before local elections proceed.

Separatist groups in the east are demanding that guarantees of political autonomy and local elections come first.

At his news conference in Kiev on Friday, and in a speech on Thursday to Parliament, Mr. Poroshenko was firm in his insistence that the border be sealed and under control, to stop the flow of weapons and fighters from Russia.

The Kremlin has insisted its military is not active in Ukraine but acknowledges Russian volunteers are fighting alongside separatist rebels. Ukraine and its allies say Russia is behind the fighting and note evidence, including funerals of Russian soldiers killed in action, as proof of Russia’s involvement.

The escalation in fighting was the subject of an emergency meeting Friday of the United Nations Security Council in New York, where members were briefed by Jeffrey Feltman, the undersecretary general for political affairs, and Alexander Hug, the deputy head of the Ukraine monitoring mission from the Organization for Security and Cooperation in Europe.

“We are either looking at a return to a deepening intractable conflict or a momentary upsurge,” Mr. Feltman told the council. “We cannot afford either scenario.”

Russiaâs ambassador, Vitaly I. Churkin, sought to cast his country as the voice of reason in the face of what he described as a duplicitous government in Kiev and its Western backers. “The Kiev authorities are becoming more odious and not respecting the Minsk agreement,” he said. “The situation could fall out of control with unpredictable consequences.”

Samantha Power, the United States ambassador, blamed Russia and the Ukrainian separatists for the fighting, describing it as another guise to claim more territory in eastern Ukraine. “It seems the contact line can shift to include the territories that they feel they deserve,” she said.

Ms. Power also criticized what she described as Russia’s deceptive practice of denying its soldiers are participating in the fighting. She referred to President Vladimir V. Putin’s decree last week classifying the deaths of any Russian soldiers in peacetime special operations as a state secret.

“Not content with denying their military service in life, Russia now denies their loved ones the respect and closure - not to mention social services - for their service in death,” Ms. Power said.

When it comes to ransomware, you don't always get … END_OF_DOCUMENT_TOKEN_TO_BE_REPLACED

Peyton Carr is a financial advisor to founders, … END_OF_DOCUMENT_TOKEN_TO_BE_REPLACED