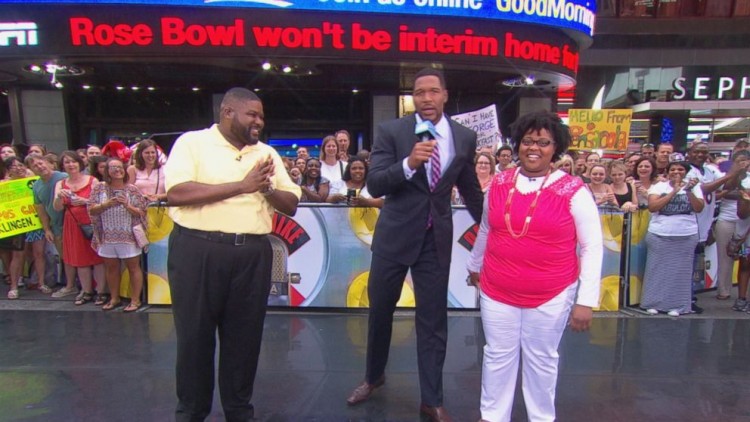 The incredible father-daughter duo who have taken the Internet by storm with their epic beatbox battles traveled to “Good Morning America” to officially settle the score this morning, facing off in Times Square for a final battle to be crowned the ultimate mouth-musician winner once and for all.

The dad, Ed “The Mentor” Cage, had one last shot today to claim the crown from his daughter, Nicole “The Apprentice” Paris, who, according to their newfound fans online, has won the previous battles in their impressive viral showdowns that have racked up more than 1 million views.

Cage, attempting to take back his title, says he taught his daughter everything she knows, but that her beatboxing talents flourished while she was attending Johnson and Wales University in Providence, Rhode Island.

“She went away to school and then she came back and said, ‘Daddy, come on, let’s battle,’” Cage, of St. Louis, recalled. “And then we battled, and when I got into the bed that night I looked over at my wife and said, ‘I barely beat her. I beat her, but I barely beat her.’ But over time she just got great.”

The two went head-to-head in their final beatboxing battle with the audience determining the winner by a round of applause.

Both put up a good fight, giving it their best mouth-music performances thus far.

But once the competition was complete, “The people have spoken,” Strahan said. “Nicole is the winner. Here is your beatboxing trophy. Put that on the mantle.”

Her proud father seemed fine with the outcome, beaming from ear to ear while clapping for his talented daughter.

When it comes to ransomware, you don't always get … END_OF_DOCUMENT_TOKEN_TO_BE_REPLACED

Peyton Carr is a financial advisor to founders, … END_OF_DOCUMENT_TOKEN_TO_BE_REPLACED