You are here: Home / Technology / What If You Could Wear Your Phone on Your Skin? 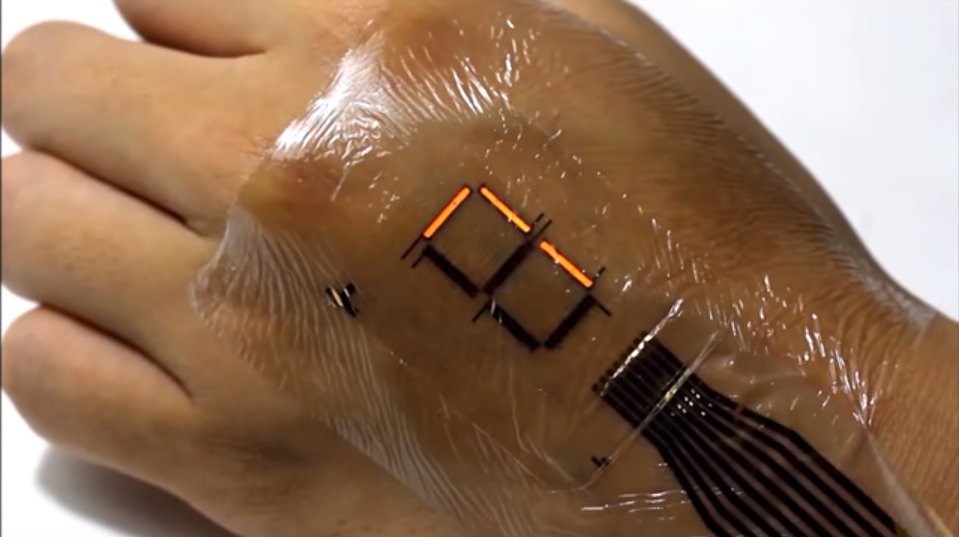 What if you didn’t need to carry your phone around anymore — you could just wear your phone on your skin instead? That might not be so far fetched. We’re not quite at the level of watching entire TV shows in the palms of our hands, but blinky temporary tattoos may be a little closer. And not just for the sake of having blinky temporary tattoos (although that’s a worthy goal in and of itself). A team of researchers believes its flexible, OLED-embedded electronic skin has potential applications for health monitoring and communications.

The research appears in the April 15 edition of Science Advances. Takao Someya and Tomoyuki Yokota at the University of Tokyo’s Graduate School of Engineering have developed the skin, which solves several problems with wearable displays. It manages to be thin and flexible, so that it can move with the skin and body, eliminating the need for thick, rigid glass or plastic substrates. This could limit the number of devices we carry around in our pockets.

“The advent of mobile phones has changed the way we communicate. While these communication tools are getting smaller and smaller, they are still discrete devices that we have to carry with us,” Someya said in a statement.

Previously, attempts at such technology were not able to survive for more than a few hours. This is because oxygen and water vapour in the air penetrated the skin, damaging it irreparably. By alternately layering inorganic silicon oxynitrite and organic parylene, Someya and Yokota created a protective film that extends the lifetime of their skin to several days, rather than hours.

They also attached indium tin oxide electrodes to a thin substrate without damaging it, powering ultrathin polymer light-emitting diodes (just three micrometres thick) and organic photodetectors in the skin. The result is an electronic skin with an embedded OLED display that stretches and crumples with the skin that would work particularly well as a pulse monitor or blood oxygen sensor.

“What would the world be like if we had displays that could adhere to our bodies and even show our emotions or level of stress or unease?” Someya said. “In addition to not having to carry a device with us at all times, they might enhance the way we interact with those around us or add a whole new dimension to how we communicate.”

When it comes to ransomware, you don't always get … END_OF_DOCUMENT_TOKEN_TO_BE_REPLACED

Peyton Carr is a financial advisor to founders, … END_OF_DOCUMENT_TOKEN_TO_BE_REPLACED