You are here: Home / Lifestyle / Well: The Y.M.C.A.’s Work Outside the Gym 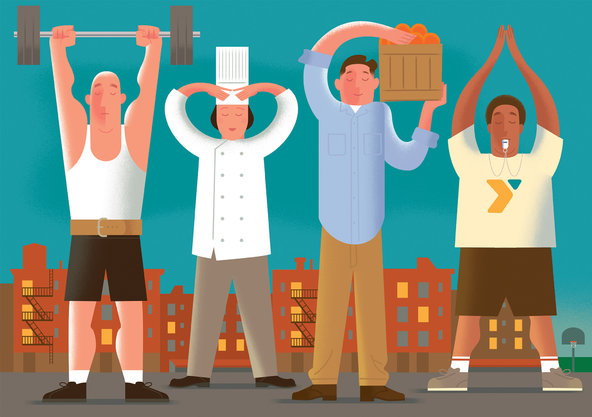 As a Y.M.C.A. member since 1984, I know it as a great place to become and remain fit, make friends and receive encouragement and support.

What I didn’t know, and I suspect you don’t either, is that the Y.M.C.A. of the U.S.A. is also a prime mover nationwide in creating opportunities for healthier lifestyles, especially for those living in poor communities with few options to exercise safely and eat healthfully.

The organization estimates that its 11-year-old Healthier Communities Initiatives program, now in 247 communities across the country, has led to more than 39,000 changes to support healthy living, benefiting as many as 73 million people.

One very enthusiastic beneficiary is Jorge Caraballo, a resident of East New York, Brooklyn, a poor, mixed neighborhood often called a food desert because of the dearth of places to buy healthful food. At age 38, Mr. Caraballo was seriously overweight and on the way to developing diabetes when, through the recommendation of two doctors, he joined the Y’s Diabetes Prevention Program.

“Because of the Y, I’ve been able to completely transform my life,” Mr. Caraballo said in an interview. “With the amazing support I received from fellow participants and my lifestyle coach, I learned to make healthier eating choices, break old habits and create new ones, and increase my physical activity.”

Two years later, Mr. Caraballo said, he had lost 50 pounds and was no longer prediabetic. He became a Zumba and swimming enthusiast, and learned to prepare healthier meals by, for example, substituting quinoa for rice, which also improved the health of his 80-year-old grandmother who lives with him.

After completing the 16-week program and six monthly maintenance classes, Mr. Caraballo decided to give back to the community. He took classes to teach Zumba and become a certified lifestyle coach, a role he now fulfills at the Flatbush Y.M.C.A. in Brooklyn.

The Healthier Communities project, which was begun in 2004 in collaboration with the Centers for Disease Control and Prevention, seeks to prevent costly chronic diseases through cultural changes that foster healthy lifestyles regardless of ethnicity or economic status. Two years ago, the C.D.C. awarded so-called Reach grants, for Racial and Ethnic Approaches to Community Health, to 16 communities already involved in promoting healthier living.

Monica Hobbs Vinluan, director of the initiatives, says the long-term goal is to take disease prevention out of the doctor’s office, where it is based largely on medications, and place it front and center where people live, work, shop and play.

Unlike the myriad and laudable individual projects around the country like walks and fun runs that often disappear “when the money goes away,” she said, this one fosters lasting changes that build healthy communities, for example, by designing sidewalks, providing access to healthy food and creating safe places for children to play.

Promoters of the initiatives recognized that it takes a broad range of perspectives and stakeholders from different sectors of a community to achieve changes that will stick long after the initiators are gone.

Richmond, Calif., which had one of the highest crime rates and worst health ratings in the country, is one of the project’s success stories. Don Lau, executive vice president of the Y.M.C.A. of the East Bay, said that, aided by the local police department, the Y program had made it safer for children to walk to school and play in the city’s parks. Residents feel more comfortable walking the streets now with new traffic calming measures and improved lighting.

Space for free fitness classes was established at the Center for Health and Healing, formed by a collaboration of local organizations, and the classes were “so successful they expanded into the nearby elementary school,” Mr. Lau said. Two community centers adopted open gym policies; three parks were renovated; and with support from the Richmond Community Foundation, the football and soccer field was redeveloped, providing access to physical activity indoors and out. A strong sense of community is being fostered through health-promoting nature walks, block parties, farmer’s markets and family gatherings.

Three parks have been improved, and with a grant from the California Department of Education, residents are now stenciling yellow bricks across streets and sidewalks to link a neighbor-created “network of safe, green and clean walking routes.”

In Lawrence, Mass., a city of 76,000, the Supporting Active Lifestyles for All, or Salsa, campaign is helping to reverse poor eating and exercise habits. Nearly three-fourths of Lawrence residents are Hispanic; 28.6 percent live below poverty level; 90 percent don’t meet national guidelines for fruit and vegetable consumption; and the numbers reporting any leisure time physical activity fall way below the state’s average, the Y program reported.

The Merrimack Valley Y.M.C.A. and the Y.W.C.A. of Greater Lawrence joined forces with the mayor’s office and health task force, the city’s board of health, a hospital and family health center and business leaders to counter sedentary lives and poor nutrition that raise the community’s rates of diabetes and heart disease.

Since adopting a Healthy Active Living Resolution in 2013, the city has seen a drop in childhood obesity, increased sales at farmer’s markets, more fresh produce at five bodegas, new employee wellness programs, the distribution of maps and brochures for walking routes and safe places to play, and more opportunities for physical activity.

Julian Villegas of the Merrimack Valley Y said that in just two years, the program had reached more than 25,000 people. More than 2,000 children go to the Y each week for physical activity and an “active science” program where they learn about nutrition and how the body works. They are given pedometers and tablets to translate activity into calories burned, then taught how to replace those calories with good food, Mr. Villegas said.

Through the Lawrence bodega project, fruits and vegetables have been repositioned so they are what customers see first, and “Rethink Your Plate” posters in shops encourage choosing foods that are more nourishing and lower in calories.

When it comes to ransomware, you don't always get … END_OF_DOCUMENT_TOKEN_TO_BE_REPLACED

Peyton Carr is a financial advisor to founders, … END_OF_DOCUMENT_TOKEN_TO_BE_REPLACED