You are here: Home / Science / What Are Those Pom-Pom Things On A Giraffe’s Head? 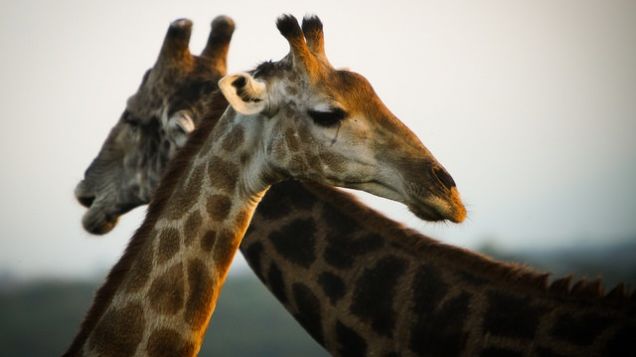 The fact that they are covered with hair, and have little puffs at the end makes them look distinctly unlike the horns or antlers we’re used to seeing on other grazing animals. We’re right to make the distinction. The giraffe shares its headgear with only one other extant animal, the okapi. Every other animal that has had these things has gone extinct.

The tufts themselves are called ossicones. When the giraffe is born, they’re made of soft cartilage. Over the course of its life, they turn to bone, so that adult giraffe skulls have what look like two antlers. Scientists know that they didn’t start as bone both because they can study younger giraffes, and because they have found skulls of giraffes with ossicones that haven’t yet fused to their heads.

What scientists haven’t found are skulls of extinct giraffidae with ossicones not yet fused to their heads. This has kicked off a debate about whether we’re witnessing, on the okapi and the giraffe, the only examples of true ossicones to walk the Earth, or if we don’t have enough examples of ancient species to be sure.

Whatever the answer turns out to be, the fact that a cartilage protrusion can harden into bone is food for thought. It would be interesting if humans worked the same way, born with squishy noses and ears that harden into bony antlers by the time we reach maturity.

When it comes to ransomware, you don't always get … END_OF_DOCUMENT_TOKEN_TO_BE_REPLACED

Peyton Carr is a financial advisor to founders, … END_OF_DOCUMENT_TOKEN_TO_BE_REPLACED