You are here: Home / World / What Will Happen to Cass Corridor Homeless as Arena District Moves In? 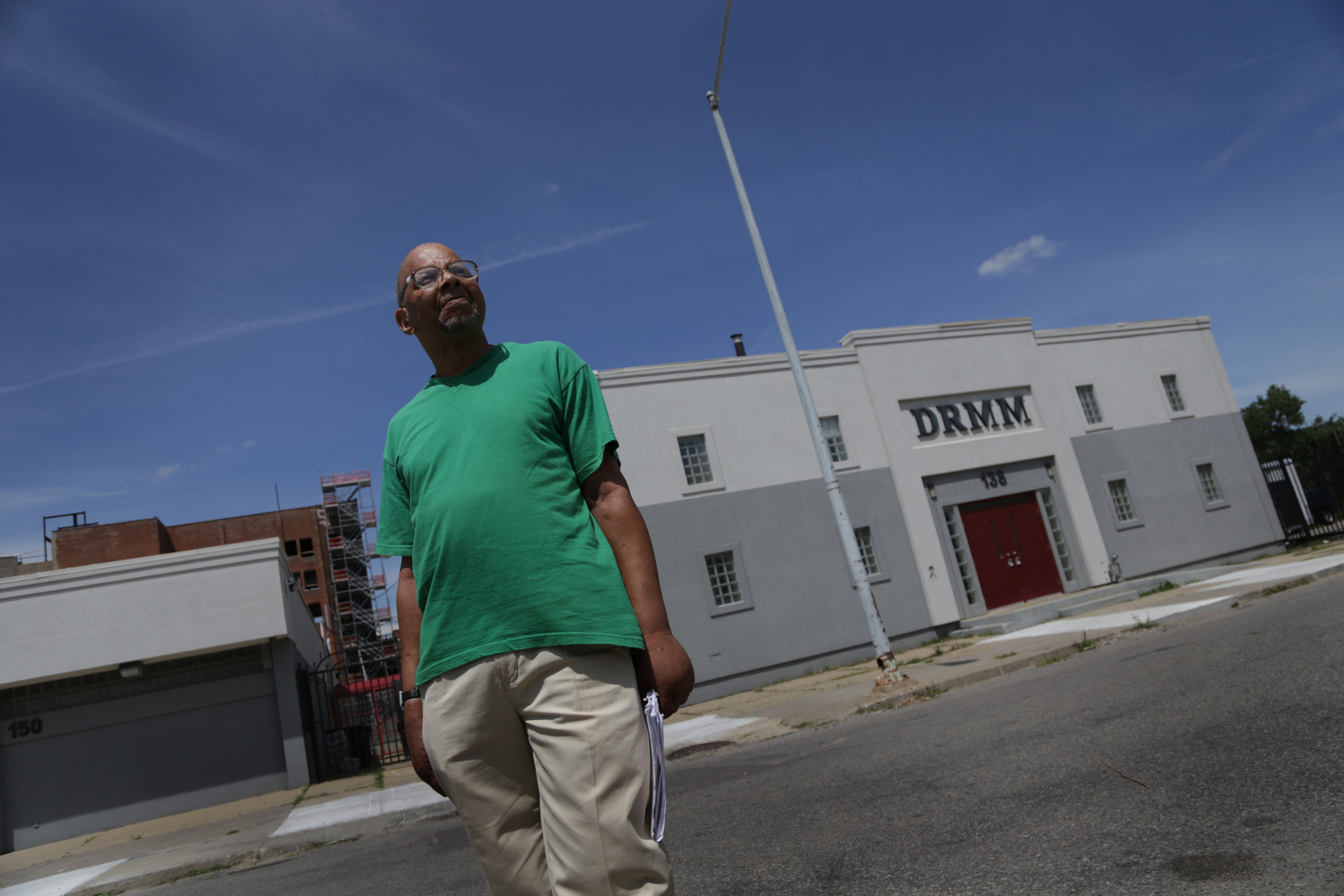 As the Detroit Red Wings prepare for a new home just north of downtown, some social services agencies that for years looked after the city’s poorest and most vulnerable people now need new homes as they make room for what may be the largest commercial development in Detroit in decades.

The lower end of Detroit’s Cass Corridor for decades has been a hub for social services providers who serve the city’s homeless people and those with substance abuse problems. Agencies such as the Neighborhood Service Organization, which has a shelter and service center for homeless people at Third and Martin Luther King, find themselves in the path of redevelopment projects that promise to transform the neighborhood.

As the corridor was rebranded in recent years as Midtown, with intense redevelopment along Woodward, some human service agencies have already left. More than a decade ago, the Salvation Army moved its Harbor Light substance abuse treatment center and homeless facility out of the historic Park Avenue Hotel, which was demolished last month to make way for the new arena. Harbor Light is now at the Salvation Army’s Acres of Hope campus on Lawton on the near west side.

But other agencies have stayed in the neighborhood because there’s still a need, as homeless people and those with alcohol and drug addictions still hang around.

“We don’t believe our mission is done yet in this neighborhood,” said Chad Audi, president of Detroit Rescue Mission Ministries, which works to turn around the lives of homeless and addicted people. “We hope one day there will be no more homelessness in the Cass Corridor or Detroit, and we’ll be glad to find another business to do.”

Along with the glitz and gleam of the $450-million arena, the Ilitches’ Olympia Development is planning five new neighborhoods on 50 blocks straddling I-75 — collectively called the District Detroit. These will stand in stark contrast to the old corridor, long a haven for the down and out, the counterculture, artists, drugs, prostitution and homelessness.

In recent years, as development swept in and old low-rent motels and other businesses were bought up or torn down, a lot of the old corridor has disappeared. But it remains a focal point for the homeless, ranging from people who’ve lost jobs and need help to get back on their feet to the chronically homeless and addicted.

Audi and other leaders of social service providers say they’ve not been pressured to consider moving, although developers have contacted them about selling their properties.

But Sheilah Clay, president and CEO of the Neighborhood Service Organization, said her agency is actively pursuing a move for its Tumaini Center, the homeless shelter and service center at Third and Martin Luther King helping those who she calls some of the most chronic homeless people in Detroit.

The center is one of the city’s most visible signs of homelessness, with clientele who hang out on the sidewalks and on vacant lots nearby that the NSO doesn’t own. Clay says she hopes at some point that she’ll be able to build a new, larger facility that can provide shelter and services to more people, but the NSO will need financial help to get to that point.

“Things have changed and we recognize that,” Clay said recently. “But we still have a homeless problem in this community, about 16,000 strong.

“We have some people who don’t want to be homeless, and we are moving them out of homelessness and getting them housed,” Clay said. “But there has to be a recognition that there are people in our community who are homeless and who are sick. … Those are the people we have to continue to protect, guide and work with them until they understand that their life can be better if they allow us to help them be housed again and end their life in homelessness.”

The Michigan Veterans Foundation, which provides services including housing assistance and addiction treatment to veterans, has sold its location near Woodward and Temple and will relocate, officials said. The organization’s executive director, Tyrone Chatman, couldn’t be reached for comment Friday. Officials from the Coalition on Temporary Shelter, or COTS, another large homeless services provider, also weren’t available Friday.

But David Sampson, CEO of Mariners Inn, a homelessness and substance abuse treatment center across Cass Avenue from where the arena is being built, said only that, “similar to many organizations in this area, we are evaluating our options and will make a decision based upon what’s best for the mission of Mariners Inn.”

The development pressure on the Cass Corridor comes as Detroit’s leaders study new ways of dealing with homelessness in the city. Mayor Mike Duggan’s administration is winning praise from Clay, Audi and others for renewing attention on the issue, and a task force set up by City Councilwoman Mary Sheffield is focused on gauging the best ways to address it.

Sheffield started the task force seven months ago, and its members — from the state and federal governments, the Duggan administration, homeless services providers and formerly homeless residents — meet monthly. What’s emerging, Sheffield said, is a focus on a “housing first” strategy, in which homeless people are first quickly provided a place to live, with support from service agencies that help them address physical and mental health issues, substance abuse and barriers to employment.

“If we keep our strategy and mind-set on housing homeless individuals and not just moving them from shelter to shelter, then we won’t have the issue of them populating certain areas because they’ll be housed with coordinated services,” Sheffield said. “We’re still relatively new, and we’re still getting a handle on how that looks and how we’ll implement it.”

Regarding possible moves of homeless shelters, Sheffield said that if, at some point, areas like Midtown are no longer considered the right place for them, “we’re very much capable of handling this and producing a win-win for everybody. I do believe we can have a coordinated effort, a strategy to help them move.”

Arthur Jemison, Duggan’s director of Housing and Revitalization, said the administration is getting close to announcing a new strategy for homeless services in the city, one that emphasizes reducing the homeless population with the housing-first approach and creating permanent housing options. He said the administration is working closely with providers that are moving or considering moves so that they remain close to community services and bus lines.

He said the Ilitch organization has been receptive to supporting the city’s efforts.

“We’re pushing to make sure the housing agenda around the arena has a permanent supportive housing measure,” Jemison said. “I don’t think the mayor would have it any other way.”

Olympia spokesman Doug Kuiper said the organization has a history of supporting the human services groups in the corridor and will continue to do so as the arena district is built.

“This transformational development is for the benefit of our entire community, including these organizations, as we are providing resources that include forward-looking planning and hundreds of thousands of dollars in direct contributions to support their missions,” he said in a statement.

The right to stay

Wayne State University law professor John Mogk, an expert on urban development, said it’s not unusual in big cities to have homeless shelters and rehab facilities in neighborhoods that gentrify, and in cities like Chicago and New York, the facilities don’t hinder redevelopment. If the redevelopment in the Cass Corridor happens on a wide scale, that could displace homeless people, reducing the incentive for service providers to stay put.

But Mogk said the agencies have every legal right to remain where they are, and if the city or developers were to wish them to move to another location, “they’re going to have to buy them out and provide relocation assistance.”

Over the years, it has paid for some landowners in the corridor to hold out for higher offers on their property.

The three-story Temple Hotel, at 72 Temple, for example, operated for decades renting rooms for as long as a month and for as short as an hour. The hotel and its land sit in the footprint of the future arena and entertainment district. Last year, DTE Energy bought the property, which is next to one of its substations.

DTE and the hotel owner declined to reveal the price, but the run-down building and quarter-acre property was listed for $3.7 million. The hotel owner said his accountant described it “like maybe we hit the lottery.”

For those who choose to stay in the shadows of the arena, the city or developers also could provide funding to help shelters that stay to update the exteriors of their facilities to make them more obscure, Mogk said.

“We’re not talking about crime or violence that threatens others,” he said of shelters and treatment centers. “We’re just talking about something aesthetically unpleasing.”

Sue Mosey, executive director of the nonprofit development group Midtown Detroit Inc., said the neighborhood and its shelters and rehabs have coexisted for years. But now, with redevelopment happening and property values rising, the service agencies have an opportunity to assess whether they can sell and move to better facilities elsewhere or stay put and reinvest.

“They’re still serving a lot of clients out there, but there’s probably not as many concentrated in that area as there once were,” Mosey said. “The question is, is this the neighborhood that makes sense now?”

Clay said that the discussions she has had with city officials and developers amid the arena district’s redevelopment have been much more respectful of homeless people than in previous years.

Clay said there’s a recognition that there’s a need for organizations like hers and much more concern about how to deal with homelessness in a dignified way.

Homelessness “isn’t NSO’s problem,” she said. “This is the city of Detroit’s problem. We happen to be vehicles that are helping to do something about a problem that belongs to our society. And so, as long as people understand and respect the role that we play, and respect the people we serve, we can have some very fruitful conversations.

“I have not always had those types of conversations with people in the past, who just really disrespected ( homeless people) and saw them as less than human. And that’s the kind of thing I can’t tolerate.”

When it comes to ransomware, you don't always get … END_OF_DOCUMENT_TOKEN_TO_BE_REPLACED

Peyton Carr is a financial advisor to founders, … END_OF_DOCUMENT_TOKEN_TO_BE_REPLACED