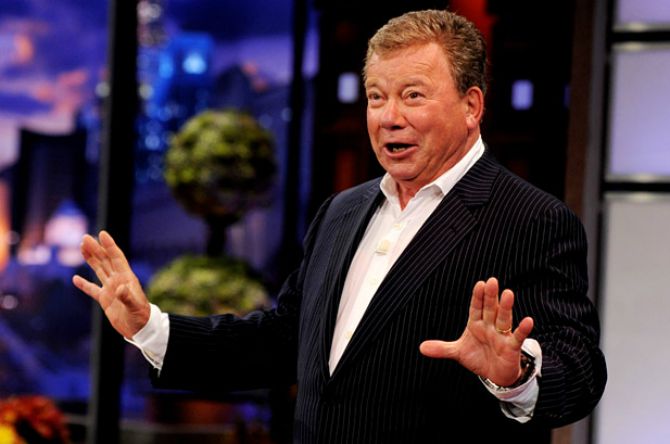 William Shatner and Justin Bieber. How’s that for a new frontier? Oh how low we have fallen Shatner … The Star Trek franchise’s Canadian veteran star publicly asked the singer to follow him on Twitter, and may be set to become the latest celebrity to hop on the promo trail for Justin Bieber’s upcoming single, “What Do You Mean?”

Less than an hour later, Shatner shared another related tweet, which read, “I cannot wait to see what the tabloids make up about the JB tweet,” alongside an emoji signifiying some kind of shocked reaction.

I cannot wait to see what the tabloids make up about the JB tweet. ????

A few hours later, Justin responded, with, “followed.” To which, Shatner replied, “Thank you.”

On Sunday, the 21-year-old singer tweeted another message of thanks to Shatner before retweeting another of the older star’s posts, in which he called Bieber’s fans a “passionate bunch.”

Happy to help @WilliamShatner. I love Supernatural for #TeamShatner

The Beliebers are a passionate bunch! ????

The 84-year-old actor added the following.

@justinbieber I sent you a DM

The actor also linked Genevieve Padalecki, who is the wife of Supernatural star Jared Padalecki into a tweet to Bieber.

While Shatner’s expected tweets about Bieber’s new single “What Do You Mean?” have yet to emerge, his posts come amid the countdown to the release of the Biebs’ lead single from his in-the-works new album.

Earlier this week, the Canadian singer announced on Ryan Seacrest’s radio show that the single will drop on August 28. The heartthrob described it as “uptempo,” “fun,” “summery,” and “amazing,” before teasing that his new music is similar to “Where Are Ü Now?” — his collaborative EDM banger with Jack Ü’s Skrillex and Diplo.

Since the announcement, Team Bieber launched a release countdown, the Biebs invited fans to create art, and a celebrity has featured every day on the singer’s Instagram and Twitter accounts promoting the single.

On Wednesday (July 29) it was Seacrest, followed by Orange Is The New Black breakout star Ruby Rose the next day. On Friday, The Late Late Show’s James Corden joined the lineup, with the mighty Mariah Carey being added as a late post the same day.

On Saturday, the Colombian reggaeton singer J. Balvin, (a.k.a José Álvaro Osorio Balvín) stumped up. Meanwhile, rapper and comedian Lil Dicky, (a.k.a. David Burd) featured in a funny video set in a bathroom to mark Sunday as #Day26. The comic MC went on to make a salty joke about Bieber’s privates while referring to one of his Calvin Klein campaign pics for good measure.

Check out the celebrity endorsements for Justin Bieber’s forthcoming single and a mix of fan art below.

The countdown has begun… #WhatDoYouMean #30DAYS I’m back

What Do You Mean? @RubyRose #29days pic.twitter.com/puCJzS18Cb

What Do You Mean? @JBALVIN #27DAYS #27Dias pic.twitter.com/Z4mgj0qZRa

Justin Bieber via Fahlo: MY SINGLE WHAT DO YOU MEAN IS COMING OUT STAY TUNED!! pic.twitter.com/wQ3I88k1kS

Justin wants to see YOUR artwork for #WhatDoYouMean Here’s some that I found. Make sure to share yours! pic.twitter.com/SfAJaI6SPf

this one is really cool pic.twitter.com/MdI4zjhrmA

When it comes to ransomware, you don't always get … END_OF_DOCUMENT_TOKEN_TO_BE_REPLACED

Peyton Carr is a financial advisor to founders, … END_OF_DOCUMENT_TOKEN_TO_BE_REPLACED