You are here: Home / World / Woman Killed 6 Year-old Daughter and Father Over a Boyfriend 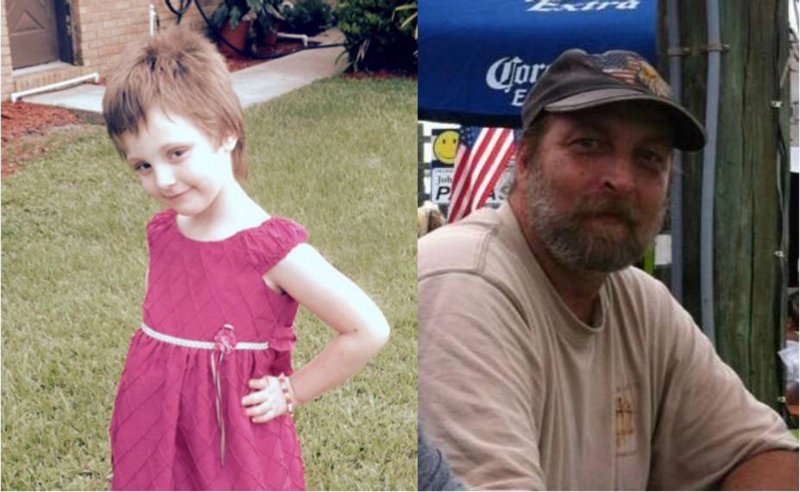 Cheyanne Jessie told police her 6 year-old and dad were missing. Then their bodies were found—and now cops say she murdered them to keep the girl from messing up her new relationship. A Florida woman called police Saturday morning to report her father and 6 year-old daughter missing.

The next day, she was charged with their murder. Cheyanne Jessie, 25, is accused of killing her little girl, Meredith Jessie, and 50 year-old dad, Mark Weekly, before allegedly hiding their bodies in bags—a maneuver cops say she learned from the TV show Criminal Minds—and stuffing them in a shed.

Even more disturbing is the alleged motive: Jessie, a cashier at a big-box store, didn’t want little Meredith interfering with a new relationship.

“Nothing’s more horrific than the murder of a child, except when it’s done by a parent, and that’s what we saw,” said Polk County Sheriff Grady Judd, who on Sunday announced first-degree murder charges against the single mom.

The sheriff was visibly shaken Sunday as he held up Jessie’s expressionless mugshot for Tampa-area TV cameras.

“This is the face and this is the eyes of a cold-blooded murderer,” Judd announced, adding that Jessie “not only murdered them… but left them in the residence for many days until it became painfully evident she had to move them.”

Police say they caught onto Jessie after she called them 11 a.m. Saturday—two weeks after her child and father went missing. The mother had been pressured into contacting authorities by other concerned family members, Judd said.

When cops met Jessie at Weekly’s home, Jessie allegedly told them Weekly was dying of terminal cancer and headed to Georgia with his granddaughter to live out the time he had left.

But the young mother’s story changed throughout the day, cops say, and they quickly eyed her as a suspect. Detectives smelled a foul odor, which she attributed to rotten meat and a dead raccoon she had found underneath the porch. But officers didn’t see any signs of the dead animal or expired food.

Authorities say Jessie killed the child and her grandfather on July 18 and transported their bodies to a shed four days later. The shed, about 200 yards down the road, was owned by Weekly’s landlord.

The mom initially told cops she dropped Meredith off at Weekly’s house in Lakeland on July 18. She said she returned July 19 and had an argument with Weekly over her problems with the child.

Jessie later told police she attacked her father in self-defense. She claimed he tried to stab her but that she fended him off with martial-arts training she learned from her boyfriend’s father. (Police say the man had no knowledge of martial arts.)

“She supposedly gets the knife away from her father after [he’s] fighting and slashing at her… and accidentally stabs the 6 year-old,” Judd said of Jessie’s version of events. “None of the evidence supports any of this.”

The sheriff said Jessie used a knife and a gun to kill the victims and a shovel to move their bodies from Weekly’s home to a Chevy Suburban. It’s unclear how each victim died or who died first. Autopsies hadn’t yet been completed Sunday.

After obtaining a search warrant, cops found a couch with slash marks inside Weekly’s home, as well as blood-soaked furniture. A rug covered a bloodstained floor.

Police also learned Jessie used Weekly’s phone to send messages to her boyfriend. She pretended to be Weekly and texted that he had only a year to live and planned to spend it with Meredith. The texts gave Jessie and her beau permission to take Weekly’s house and belongings.

Judd said the boyfriend wasn’t being eyed as a suspect Sunday. The man allegedly told police Jessie recently asked him how long it would take for a body to decompose. At the time, he didn’t think much of it, the sheriff said.

“Does she think she’s going to lose this boyfriend, which she desperately wanted, because of her daughter?” Judd said. “For whatever reason, not only does she take her daughter to her father but ultimately murders both of them.”

Polk County deputies said Jessie showed no emotion when they interviewed her. She continued to work as a cashier in the days following the alleged murder.

Judd said Jessie had been arrested once before in another state for allegedly assaulting a boyfriend with a knife.

“She didn’t like her daughter,” the sheriff said. “She was frustrated with the child. As a result, she didn’t want the child to mess up the relationship she had with her boyfriend.”

Several family members declined to comment to The Daily Beast. The day before Weekly and Meredith were found dead, they pleaded on social media for help with the missing persons case. Any hope they had turned into grief overnight.

“Everyone, PLEASE remember my family in your prayers tonight as we are faced with the loss of my uncle Mark and 6 year-old, cousin Meredith,” one relative wrote on Facebook. “I never thought anything like this could happen to people I know, but definitely never thought it could happen within my family.”

Former teachers and daycare workers also took to social media to mourn Meredith, who wore a pink dress and pixie haircut in a photo circulated by police.

April Gonzalez, who watched Meredith at daycare two years ago, told The Daily Beast she was devastated when she heard the news. She called the girl her “favorite.”

“She was a little tomboy,” Gonzalez said. “She would dress like a girl, but she was a tough girl.”

One of Jessie’s friends, contradicting the sheriff’s claim, told The Daily Beast that the mom “was a very sweet, caring person who loved her father and daughter very much.”

“I am stunned by her arrest,” said the friend, who asked to remain anonymous. “I would never have thought she was capable of this.”

When it comes to ransomware, you don't always get … END_OF_DOCUMENT_TOKEN_TO_BE_REPLACED

Peyton Carr is a financial advisor to founders, … END_OF_DOCUMENT_TOKEN_TO_BE_REPLACED