You are here: Home / Entertainment / Yoko Ono revealed the last piece of her artistic installation in Chicago 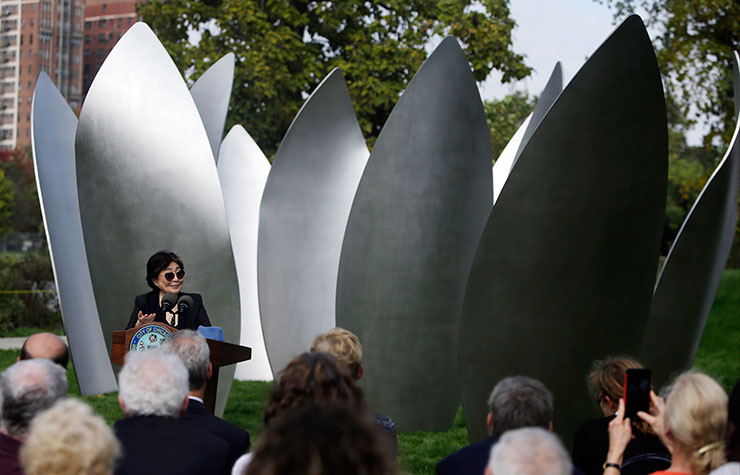 The artist Yoko Ono, the widow of the Beatles ex-member John Lennon, revealed at Chicago, the last piece of her first artistic permanent installation from the USA. The sculpture, installed at The Art Institute of Chicago, is called ‘Mended Petal’ and is a tall representation of a lotus petal made of steel. A group of 12 similar petals that made a sculpture called ‘Skylanding’ was revealed in the Jackson Park from South Side Chicago, where the future presidential library of Barak Obama will be placed (a project of Obama Foundation). Ono said that she is very, very honored to be there and that she has never expected to this. The artist’s sculptures were inspired by a Japanese garden placed in the Jackson Park in the 30’s and by a pavilion that was a gift from Japan during the International Square from 1893. The 12 petals of the ‘Skylanding’ were installed in the place where the pavilion was before it burned in 1946.

Ono also said that she is moved by the fact that Chicago kept the Japanese historical theme of the park, even if The USA were at war with her native country. The sculptures are a symbol of peace and reconciliation, elements about which the museum’s representatives said that represent familiar themes in Ono’s art. ‘She understands the significance of this zone as a position for the Japanese-American relations’ says Janice Katz, curator of Japanese art from The Art Institute of Chicago. Chicago is an important place for Yoko Ono, who traveled with John Lennon here, in the ’70s. After their visit, the ‘Walking On Thin Ice’ song, the last recording of the couple, was born. The Ono’s sculptures from Chicago are personal works that reflect her past and they encourage the city to create a new future, explained Robert Karr, the ‘Project 120 Chicago’ president.

When it comes to ransomware, you don't always get … END_OF_DOCUMENT_TOKEN_TO_BE_REPLACED

Peyton Carr is a financial advisor to founders, … END_OF_DOCUMENT_TOKEN_TO_BE_REPLACED