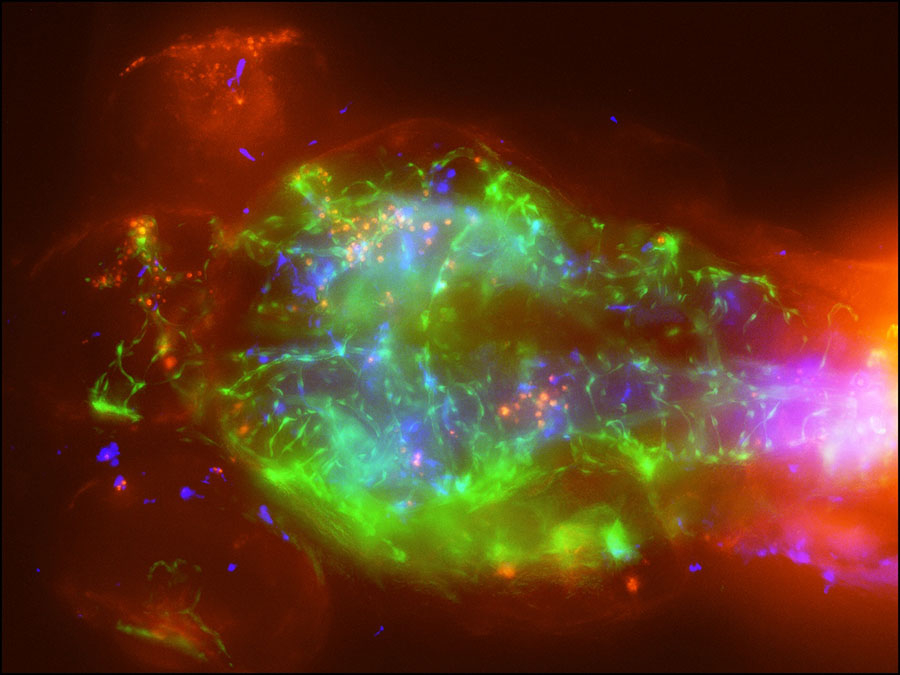 Scientists at Duke Medicine are using transparent fish to watch in real time as Cryptococcal meningitis takes over the brain. The resulting images are worthy of a sci-fi movie teaser, but could be valuable in disrupting the real, crippling brain infection that kills more than 600,000 people worldwide each year.

Airborne cells of Cryptococcus make their way into our lungs practically every day — unwelcome guests, but of little consequence for those with healthy immune systems. But for those with compromised immunities, whether by HIV infection or cancer treatment, a resulting Cryptococcal meningitis infection can quickly become deadly.

To be able to target the infection with medications in the future, researchers need to know more about how the organism (technically a yeast), moves from the lungs into the blood stream and through the blood-brain barrier. So they injected the organism into microscopic zebrafish larvae, which have clear bodies, and watched the infection take hold.
The newly developed fish model is described in mBio, a journal of the American Society of Microbiology

“What’s impressive is that, unlike in a mouse or rabbit, you can actually see the organism producing disease in the live animal,” said John R. Perfect, M.D., chief of the division of infectious diseases at Duke University School of Medicine. “Day-by-day, it’s growing and moving throughout the body. You can’t see this anywhere else.”

A video shows a transparent larva’s body as Cryptococcus fungi, made red by a fluorescent tracer, moves through tissue, blood vessels and into the brain. Blue macrophages chase and gobble up some of the red infection as it spreads through and around green blood vessels.

Using a zebrafish to observe the process of infection offers a small vertebrate animal with an immune system somewhat similar to a human’s, Perfect said. Because the fish are tiny and easy to reproduce, they cost less and are easier to study than a mouse or larger mammal.

The larvae are also permeable to small molecules, which will allow scientists to batch-test different drug compounds against the infection relatively quickly and easily, said co-author David Tobin, Ph.D., assistant professor in molecular genetics and microbiology and immunology at Duke.

“This model will allow researchers to screen the whole organism while it is living with an infection,” Tobin said. “It will allow us to screen libraries of drug compounds relatively quickly. We can also develop and test mutant strains of Cryptococcus in these larvae. This can teach us which factors play a role in infection and those could be therapeutic targets in the future.”

Tobin also uses zebrafish to study bacteria closely related to those that cause tuberculosis, and findings from this model have been applied to understanding human disease.

There are some drawbacks to studying these infections in fish — their body temperatures are cooler and they lack lungs, which is where Cryptococcus enters the human body, Perfect said. But the fish offer a starting point to create leads that scientists can then investigate further in more complex mammals.

“Our hope is that by creating this system, we can continue our own investigations into other harmful organisms, and that other scientists worldwide can adapt our zebrafish model to investigate the diseases that are priorities in their communities,” Perfect said.

When it comes to ransomware, you don't always get … END_OF_DOCUMENT_TOKEN_TO_BE_REPLACED

Peyton Carr is a financial advisor to founders, … END_OF_DOCUMENT_TOKEN_TO_BE_REPLACED