You are here: Home / Business / 3D food printers, soon in our home kitchens 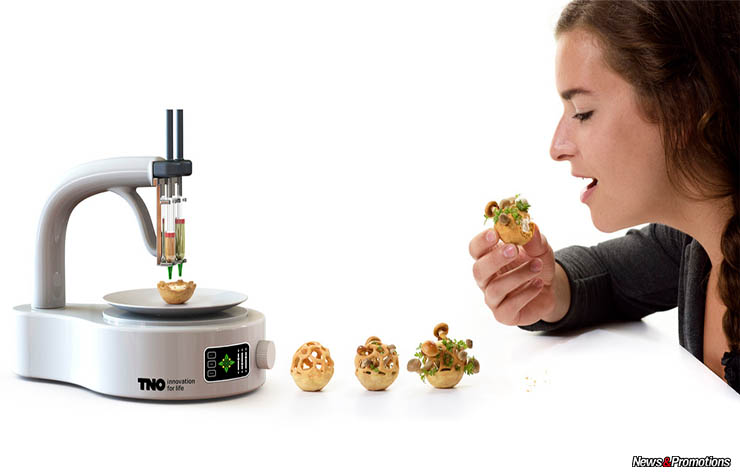 Good news for those loving the food. The 3D printers have already begun to print food, including gluten free menus and with an exhaustive control on the ingredients, according to the EFE. This new technology, enters in the kitchen, says the nutritionist Alex Vidal, a professor at the Universitat Oberta de Catalunya, Spain. According to him, the 3D printers can be found for the moment at big restaurants, only.

With this new tool can be achieved ‘elements, volumes and textures’. In a study made last year, the consultancy company Gartner appreciated that in 2016 were sold more than 455,000 units of 3D printers, and, by 2020 will be sold over 6.7 million units. Vidal sees the advantages of this technology in the case of the alimentary allergies and intolerance. ‘When something must be kept under control, like a food allergy or intolerance to gluten, it can be useful. It can help to prevent certain nutrients’, says the nutritionist. Several companies were interested in the 3D food printers. Of these, Natural Machines, from Barcelona, sells Foodini, a device that works with capsules and prints a large variety of dishes. Alex Vidal expressed his regret that, even though it can be useful for certain groups of people, this technology ‘is not accessible to all’, one of the reasons being the price, ‘which exceeds in many cases 1,000 euro’.

It can’t print any kind of ingredients, yet, specifies Vidal. This is a ‘challenge’ for the industry, along with the introduction of the cooking, because these sorts of food must be completed in the oven or in the pot, adds Vidal. To print a cake or a pizza, the machine must be supplied with raw materials and to be programmed and the making of the kind of food in question can take between 5 and 30 minutes.

When it comes to ransomware, you don't always get … END_OF_DOCUMENT_TOKEN_TO_BE_REPLACED

Peyton Carr is a financial advisor to founders, … END_OF_DOCUMENT_TOKEN_TO_BE_REPLACED