You are here: Home / World / European Leaders to Discuss Peace Process in Ukraine 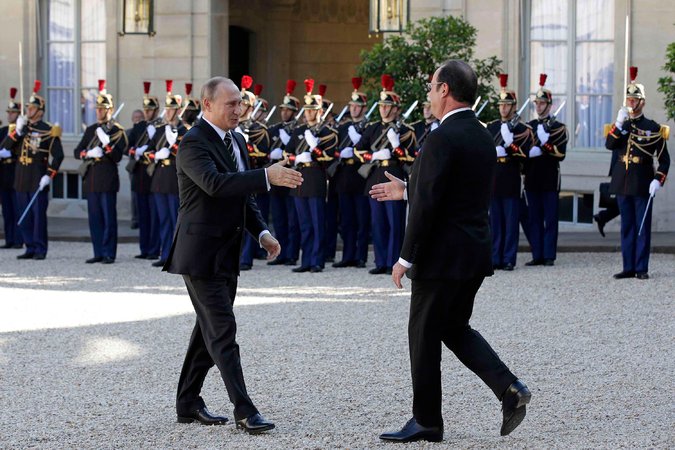 The leaders of Russia, Ukraine, Germany and France are scheduled to get together for a summit meeting that is aimed at bolstering the peace process in eastern Ukraine. Talks will most likely be overshadowed by Russia’s military action in Syria however.

Just after noon, President Vladimir V. Putin of Russia arrived at the Élysée Palace in Paris, where President François Hollande of France is hosting the gathering. President Petro O. Poroshenko of Ukraine and Chancellor Angela Merkel of Germany were expected to join him.

After a series of one-on-one meetings, the leaders will discuss the situation in eastern Ukraine, where a military conflict between pro-Russian separatists and Ukrainian government forces has left nearly 8,000 dead since April 2014 and has prompted the European Union and the United States to impose heavy economic sanctions on Russia.

The meeting’s stated purpose is to shore up the Minsk accord, the agreement between the four powers that was hammered out in the capital of Belarus in February. It is supposed to be put in effect by the end of this year, and the talks on Friday are intended to iron out remaining differences. A more recent deal was reached on the withdrawal of small-caliber weapons.

But after Russian airstrikes in Syria that began on Wednesday against positions held by antigovernment rebels, the situation in Ukraine has been eclipsed by concerns that Russia intends to use the pretext of strikes against the Islamic State to defend the Syrian president, Bashar al-Assad.

The governments of France and Germany — along with those of Britain, Qatar, Saudi Arabia, Turkey and the United States — criticized Russia’s bombing campaign in Syria in a joint statement on Friday morning.

“We express our deep concern with regard to the Russian military buildup in Syria, and especially the attacks by the Russian Air Force on Hama and Homs yesterday, which led to civilian casualties and did not target Daesh,” the governments said the a statement, using an Arabic acronym for the Islamic State. “These military actions constitute a further escalation and will only fuel more extremism and radicalization.”

But Mr. Putin evidently hopes that that shift in attention toward Syria might speed the lifting of Western sanctions, if it becomes too difficult for the Americans and their allies to maintain the position that they are cooperating with Moscow on fighting the Islamic State in Syria while still trying to punish it for its actions in Ukraine.

Even though French officials have emphasized that the two conflicts are distinct and that Syria will not be the focus of the talks on Friday, there is little doubt that Mr. Hollande and Ms. Merkel will raise the issue with Mr. Putin. The continuing refugee crisis, fueled in part by the war in Syria, is a source of great concern for France and Germany and has shifted their focus from the conflict in Ukraine.

Russia and Ukraine have repeatedly pledged to push the carrying out of the Minsk agreement — and accused the other of foot-dragging.

“Unfortunately, there is still a long way to go to its resolution,” Mr. Putin said on the eve of his departure for Paris. “Yet there are things inspiring confidence that this crisis can be overcome.”

He called the cease-fire, now entering its second month, the main sign of that. This week, all sides agreed on the withdrawal of tanks and other weapons from the front line.

The Ukrainian government accuses the Kremlin of deploying military hardware and thousands of troops on its soil. Russia has repeatedly denied it has any active forces in Ukraine. It says the February 2014 revolution there was a coup plotted by the West.

Many analysts believe that Russia is seeking to create a frozen conflict there that will permanently destabilize Ukraine, much as it did in Georgia before its 2008 war and in various other countries of the former Soviet Union to keep them out of the orbit of the European Union.

Mr. Poroshenko has constantly tried to persuade European leaders to pressure Moscow, including with new sanctions if necessary, by calling the fight for Ukraine a fight for European values.

Ukrainian demands include universal access for cease-fire monitors from the Organization for Security and Cooperation in Europe; the withdrawal of Russian military forces, military equipment and volunteer fighters from Ukraine; and the restoration of Ukrainian control over its southern border with Russia.

“Freedom, peace, respect for the sovereignty and territorial integrity — Ukraine doesn’t demand more,” Mr. Poroshenko said in a speech this week at the United Nations.

The United States is not directly involved in the negotiations. It has helped train new military forces, and Ukraine has continued to lobby the Americans for more powerful weapons, but so far Washington has resisted.

All year, the first, most important provision in the Minsk accord, a cease-fire, never materialized, with some of the worst fighting in southeastern Ukraine erupting in August. But a renewed cease-fire agreement for Sept. 1 suddenly took hold, and the area has remained largely calm ever since.

The Kremlin appeared to switch its focus, talking about Syria and terrorism and Mr. Putin’s central role in defusing the global threat from the Islamic State. Ukraine all but disappeared from Russia’s state-run television stations.

Mr. Putin, seeking to find a new distraction for a Russian public weary with Ukraine and to get Western economic sanctions lifted, seemed to pressure his allies in the breakaway republics of Luhansk and Donetsk, known collectively as Donbas, to take a new tack.

Suddenly, they started talking about the political process and being part of Ukraine. The longer the cease-fire holds, the more the public on both sides will most likely be willing to accept compromise after 16 months of fighting.

There are potential pitfalls along the way. A long-awaited report from a Dutch inquiry into the shooting down of Malaysia Airlines Flight 17 in July 2014, killing all 298 people aboard, is due on Oct. 13. The plane, which was flying to Kuala Lumpur, Malaysia, from Amsterdam, is widely believed to have been struck by a missile fired by separatists forces, a conclusion that Moscow disputes. It has blocked the formation of a United Nations tribunal on the issue.

From the beginning of the crisis, Russia has been talking about the “federalization” of Ukraine, including allowing the regions to forge their own foreign and trade policies. Kiev opposes that, seeing it as a formula for endless Russian meddling and perhaps even the disintegration of the country.

Instead, it has been pushing decentralization, a kind of French model that means enhanced revenue sharing with the regions and autonomy for local councils that only the president could override.

The law faced a turbulent passage through the Ukrainian Parliament, where a nationalist bloc accused Mr. Poroshenko of caving in to Russia and of taking too much presidential power. Violent demonstrations outside Parliament during the vote in late August killed three members of the National Guard. Although there is a law, Russia says it has not been put in effect.

Russia accuses Ukraine of violating the Minsk agreement by not negotiating directly with the leaders of the breakaway regions over their future.

“The people of Donbas should have their rights and interests genuinely considered, and their choice respected,” Mr. Putin said in a speech at the United Nations on Monday. “They should be engaged in devising the key elements of the country’s political system, in line with the provisions of the Minsk agreements.”

Ukraine says it is negotiating with the leaders of Donbas, but through the Trilateral Contact Group set up after the Minsk talks and supervised by the Organization for Security and Cooperation in Europe. Western capitals have supported the idea that negotiations continue under that formula. They have resisted the idea that Kiev negotiate with the separatists, as that would allow Russia to claim that it is strictly an internal Ukrainian matter.

The test will be local elections that Kiev has set for Oct. 25. Donetsk and Luhansk keep threatening to organize their own votes on Oct. 18 and in early November. That is one of the issues to be addressed in Paris, and the compromise is difficult to anticipate.

“I cannot see separatists winning the elections, and if they are not going to be elected, the Russians are probably not interested,” said one Western diplomat in Kiev, speaking on the condition of anonymity because of the sensitivity of the matter. “But neither Russia nor Ukraine wants to be responsible for the failure of the elections.”

When it comes to ransomware, you don't always get … END_OF_DOCUMENT_TOKEN_TO_BE_REPLACED

Peyton Carr is a financial advisor to founders, … END_OF_DOCUMENT_TOKEN_TO_BE_REPLACED