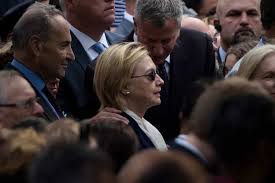 Hillary Clinton had to interrupt her campaign after she was about to fall during the 9/11 commemoration ceremonies. The democrats’ candidate was diagnosed with pneumonia and she was advised to rest and to take antibiotics. The investors received a strong hit once with these news about the health of Clinton. The market volatility has already begun to appear in the background of the signals that one of the two candidates to the USA presidency is sick. In this way, the Clinton’s victory in the presidential elections is overshadowed, especially by the stock markets. Prediction, the political results stock, gives to Trump one of three chances of winning the elections. This aspect would mean more market’s volatility, which don’t have to meet surprises and insecurities. The possible victory of Trump will mean the both things.

The stocks will react if Donald Trump will be the president of the USA, as a controversial character. His victory would also mean a decline of the dollar, which will give again a push to the price. Trump has already declared a currency war against the partners like Japan and China. If Trump would be elected, the companies from the defense industry should have a rising: Trump promised to drastically increase the America’s costs for defense. An eventual victory of Trump would also mean the coming back in the center of attention of the pharmaceutical industry, including the insurers of the pharmaceutical and biotechnology companies. The investors are afraid that the victory of Hillary Clinton, who promised a reduction of the costs, would mean smaller rate profits for the companies of the pharmaceutical industry. The implications of the Trump’s victory would not stop here. It would also mean an increasing of the real estate companies’ stocks, because of the ‘wall’ that Trump promised to build on the border with Mexico.

When it comes to ransomware, you don't always get … END_OF_DOCUMENT_TOKEN_TO_BE_REPLACED

Peyton Carr is a financial advisor to founders, … END_OF_DOCUMENT_TOKEN_TO_BE_REPLACED