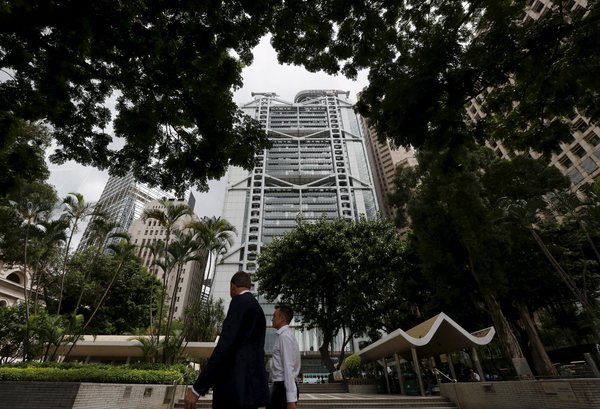 The bank said it would eliminate 22,000 to 25,000 full-time jobs, or about 10 percent of its work force, through restructuring by the end of 2017. It would also reduce its head count by another 25,000 positions through the sale of its underperforming businesses in Turkey and Brazil.

As a result, the bank will have shrunk its work force by about 87,000 since 2010, including an earlier series of job cuts.

HSBC said that it would increase its investment in Asia, where it generates more than half of its earnings. The bank said it would complete a review of whether to move its headquarters from Britain by the end of the year.

The reshaping comes as HSBC faces an increasingly challenging regulatory environment in Britain and across its global platform, which spans 73 countries and territories. The lender has exited dozens of underperforming businesses in recent years as it looks to cut costs and reduce its risk.

“The world is increasingly connected, with Asia expected to show high growth and become the center of global trade over the next decade,” Stuart Gulliver, the bank’s chief executive, said in a news release. “I am confident that our actions will allow us to capture expected future growth opportunities and deliver further value to shareholders.”

The bank’s shares fell nearly 1 percent initially but were up slightly in early trading in London.

As part of an update to investors on Tuesday, HSBC said it wanted to reduce its costs by $4.5 billion to $5 billion annually within two years. The lender said it expected to book restructuring costs of $4 billion to $4.5 billion over that period.

The bank is also looking to reduce the amount of riskier assets on its balance sheet, including cutting the size of its global banking and markets business and focusing on strategically important and profitable businesses.

HSBC said it would reduce so-called risk-weighted assets, a measure of the risk of the capital it holds, by 25 percent, or about $290 billion. About half of those reductions will come from the investment banking business, the lender said.

The sale of its operations in Turkey and in Brazil had been anticipated for some time, but the bank said it would keep a presence in Brazil to serve large corporate clients.

In February, Mr. Gulliver identified the Brazilian and Turkish businesses among four “problem” markets where HSBC would seek more extreme restructuring measures if returns did not improve. The bank is also seeking improvement in its operations in Mexico and in the United States.

In April, HSBC announced that it was formally reviewing whether to move its headquarters from Britain. The bank is facing a shifting regulatory landscape in Britain that includes a bank tax that has hit British lenders particularly hard.

The government has raised the bank tax, known as a bank levy, nine times since it was introduced, taking in 5.3 billion pounds, or about $8.1 billion, according to the British Bankers’ Association.

The bank, which traces its roots to Hong Kong, has been based in Britain since 1993.

Banks in Britain will be required by 2019 to shield their retail banking operations from the effects of investment banking and other activities in the event of another financial crisis — a process known as ring-fencing.

As part of its restructuring, HSBC said that it planned to begin setting up a ring-fenced bank in Britain.

Despite reducing the size of its business in some markets, HSBC said it planned to expand its asset management and insurance operations in Asia in hopes of capturing “expected opportunities from emerging wealth in the region.”

It also plans to increase its business in the Pearl River Delta area in the southern Chinese province of Guangdong, and in parts of Southeast Asia.

When it comes to ransomware, you don't always get … END_OF_DOCUMENT_TOKEN_TO_BE_REPLACED

Peyton Carr is a financial advisor to founders, … END_OF_DOCUMENT_TOKEN_TO_BE_REPLACED