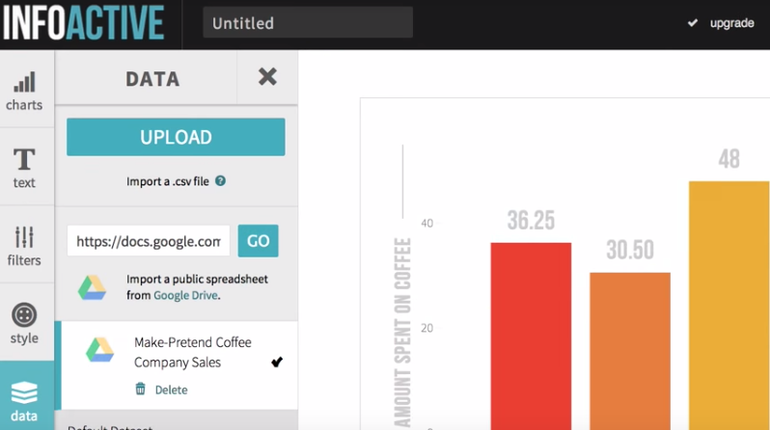 Tableau Software announced Tuesday it has acquired InfoActive, a Montreal-based startup specializing in mobile and user-friendly infographics. Tableau plans to shut down InfoActive as a standalone operation, saying the service will “wind down over the coming months.”

InfoActive users are being funneled into Tableau’s free data visualization platform Tableau Public. Financial terms of the deal were not disclosed. InfoActive is a relatively young entity, having launched its first public beta just last year. In 2013 it won the award for Best Bootstrap Company at the tech festival SXSW, and followed up with a successful Kickstarter campaign later that year.

One of the main draws for InfoActive is its usability. The platform uses drag-and-drop functionality to take some of the pain (and required expertise) out of creating infographics.

“Our goal at Infoactive was to blend our passion for data and design to help people make sense of information,” Chiasson said in a statement. “We’ve always admired Tableau’s mission to help people see and understand data and we’re thrilled to work together to pursue our shared vision.”

As for Tableau, the darling of data discovery and emerging analytics vendor reported strong second quarter earnings last week. With $149.9 million in total revenue, Tableau has managed to beat analyst expectations for earnings for the past nine quarters.

When it comes to ransomware, you don't always get … END_OF_DOCUMENT_TOKEN_TO_BE_REPLACED

Peyton Carr is a financial advisor to founders, … END_OF_DOCUMENT_TOKEN_TO_BE_REPLACED