You are here: Home / Business / Barack Obama offered the Presidential Medal of Freedom to celebrities from movies, TV, science and sports 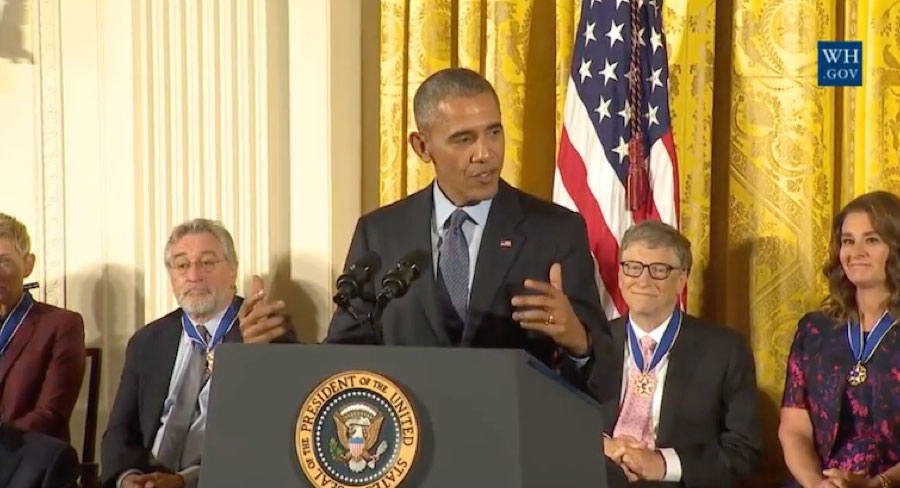 The American president Barack Obama, offered on Tuesday at the White House, the Presidential Medal of Freedom, the highest civil distinction granted in the USA, to a group of 21 personalities among which are: Robert De Niro, Robert Redford, Bill and Melinda Gates, Michael Jordan, Ellen DeGeneres and Bruce Springsteen. Obama presented the prestigious title to the Microsoft co-founder, Bill Gates and to his wife, Melinda, to the actors Robert De Niro, Robert Redford and Tom Hanks, to the former basketball champions Michael Jordan and Kareem Abdul-Jabbar, and to other celebrities. Among the personalities who received the medal this year was also the soul singer Diana Ross, the rock star Bruce Springsteen, the leader of the Native Americans Community Elouise Cobell, the television star Ellen DeGeneres and the researcher Margaret H. Hamilton, who is behind the software used by NASA during the spatial program Apollo.

‘It’s useful, when you think about this incredible collection of people, to realize this is what makes us the greatest nation on earth,’ said Obama on the occasion of this event. After eight years at the White House, the president Barack Obama will end his mandate in January 2017, being replaced by the businessman Donald Trump, who won the recent presidential elections in the United States against the democratic candidate Hillary Clinton. Ellen DeGeneres couldn’t hold her tears hearing the speech about her. ‘It’s easy to forget now just how much courage was required for Ellen to come out on the most public of stages 20 years ago’ said Obama. ‘What an incredible burden that was to bear – to risk your career like that – people don’t do that very often. And then, to have the hopes of millions on your shoulders’, added the president. DeGeneres posted a photo of her together with her wife, Portia de Rossi, right after the ceremony.

When it comes to ransomware, you don't always get … END_OF_DOCUMENT_TOKEN_TO_BE_REPLACED

Peyton Carr is a financial advisor to founders, … END_OF_DOCUMENT_TOKEN_TO_BE_REPLACED