You are here: Home / Business / Barack Obama plays golf with Bill Murray in the Oval Office 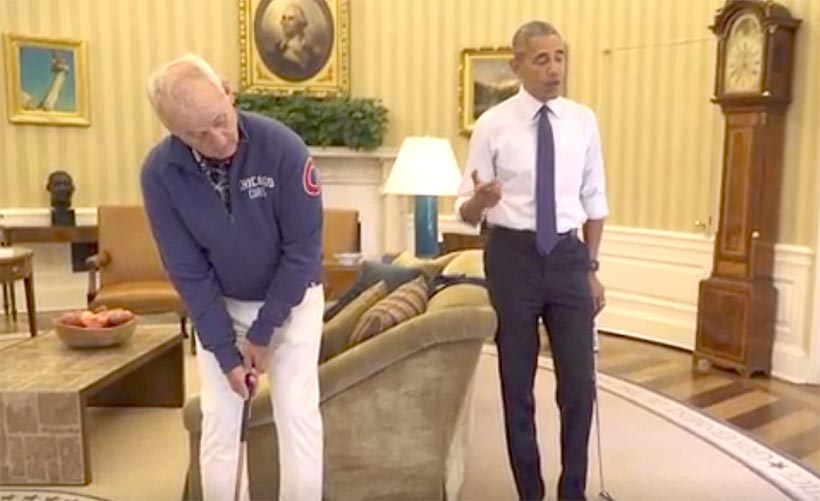 With a few weeks before leaving his office at the White House, Barack Obama continues to promote the reform of the health care system in the United States of America, under the circumstances in which his successor, Donald Trump, announced during the presidential campaign that he wishes to eliminate the law regarding the health insurances ‘as soon as possible’. Obama played a golf game in the Oval Office with the actor Bill Murray, in a contest ‘improvised’ as a pretext for promoting the ‘Obamacare’, the famous and sometimes criticized health care system reform of the president who spends his last days in the White House. While playing golf, using a glass, the actor complains about a pain in his knee. ‘You all right?’, asks the American president.

‘Have you had it looked at?’ he asks Murray. The conversation is oriented toward the promotion of ‘Affordable Care Act’, known better under the name of ‘Obamacare’. About the golf game with Bill Murray, Obama said: ‘He came into the Oval Office in a Cubs shirt. First of all, most people come in a shirt and tie. It was Bill Murray so I get no tie. He agreed to do a little social media skit about signing up… people who didn’t have health care… because open enrollment is coming up. We decided we were going to putt on the carpet in the oval office. Somebody grabbed a glass so we were trying to putt in the glass. He won repeatedly! The glass was rigged.

I was a little frustrated. What makes matters worse is he was giving me tips about putting. He’s all, ‘I think your right hand is a little too firm.’… Bill, you’re a comedian not a golfer. He took money from me. I paid him $5. Basically the whole visit was a disaster.’

When it comes to ransomware, you don't always get … END_OF_DOCUMENT_TOKEN_TO_BE_REPLACED

Peyton Carr is a financial advisor to founders, … END_OF_DOCUMENT_TOKEN_TO_BE_REPLACED