You are here: Home / Business / Celebrities and students protesting after the election of Donald Trump 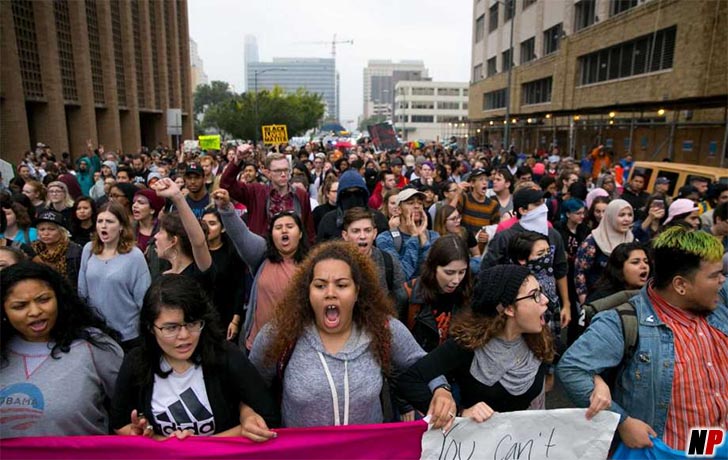 Many people went to the streets in several towns in the West of the United States on Wednesday morning, to protest against the victory of Donald Trump to the US presidential elections. Shouting is ‘Not my president’ and ‘Fuck Donald Trump’, hundreds of students and of opponents of Trump protested in cities such as Los Angeles, San Diego, Oakland and Portland, according to the information published in the press. In the videos posted on the social network pages you can see the protesters lightning candles and rocket flares and burning the American flag. In the university city, in San Francisco, a protester was hit by a car when the crowd went on the highway, according to the San Francisco Chronicle.

In New York, Lady Gaga, one of the most prestigious personalities who strongly supported Hillary Clinton in her campaign, protested in front of the Trump Tower. The pop star posted on Instagram a black and white photo in which she appears next to salubrity lorry, wearing a placard on which it is written ‘Love trumps hate’. The stars express their discontent on the social media and in the mass media. When hearing the news, the actress Mia Farrow confessed that she wants to leave in exile in Ireland. ‘I already have a passport for Ireland’, she said.

Michelle Rodriguez, the Latin star from ‘Fast and Furious’, also showed her indignation: ‘I wonder when, in the history of America, the women will be truly celebrated, not only as mothers or sisters, but as human beings able to lead’. Or his Twitter account, Chris Evans, the Captain America character in the Marvel productions, commented the announced victory of Donald Trump:’ This is an embarrassing night for America. We’ve let a hatemonger lead our great nation. We’ve let a bully set our course. I’m devastated’.

When it comes to ransomware, you don't always get … END_OF_DOCUMENT_TOKEN_TO_BE_REPLACED

Peyton Carr is a financial advisor to founders, … END_OF_DOCUMENT_TOKEN_TO_BE_REPLACED